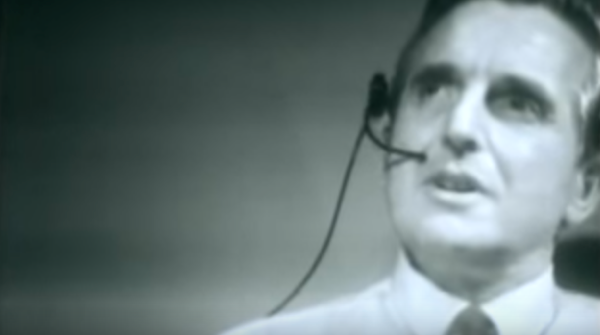 Today folks are gathered at the Computer History Museum in Mountain View, California to celebrate the 50th anniversary of the Mother of All Demos (“MOAD”). Held in 1968 in San Francisco’s Civic Auditorium, SRI’s Douglas Engelbart and others demonstrated networked computer systems they were developing, including the mouse, hypertext, and real-time collaborative editing. The MOAD has become a notorious event in computer and internet history, both presaging and shaping the digital technology environment we live in now.

While it’s clear that the demo was a key historical moment — not only for technology, but also for digital culture and practices where the MOAD is still perhaps the reigning model for how one should expose one’s work to wider audiences — there’s an inadvertent telling moment at the very start of the demo where Engelbart misspeaks, chuckles, and then corrects himself, that maybe says as much about what has unfolded since the MOAD as any technology or practice actually demoed:

If in your office you as an intellectual worker were supplied with a computer display backed up by a computer that was alive for you all day and was instantly responsible — responsive…[chuckle]…instantly responsive to every action you had, how much value could you derive from that?
— Douglas Engelbart [view the MOAD recording starting at this moment]

“Give the guy a break,” you might say, “he just stumbled over a similar word.” I’m not suggesting there was some nefarious, hidden agenda that Engelbart betrayed accidentally, nor that digital technology carries an inevitable bad seed that erupted in the MOAD via some kind of Freudian slip. But with 50 years of hindsight, it’s clear that there are deep problems around how computers are responsible: responsible for what and to whom? And that the drive to make computers more responsive — faster, more capacious, smaller, more ubiquitous, cheaper — has greatly overshadowed attempts to make them more responsible, possibly to our great peril.

It’s also telling that this seminal [word carefully chosen] event has become known as the “mother” of all demos. When I look back over these last 50 years since the MOAD, I mostly see a record of male achievement, where the contributions of women are mostly either overwritten or absent (at least until recently) and where metaphors of childbirth and mothering fit uneasily. My question, then, is whether the balance between responsibility and responsiveness might be struck very differently if digital technology were being developed more inclusively, centered on and driven by the hopes, dreams, and desires of not just men, and not just women, but everyone.